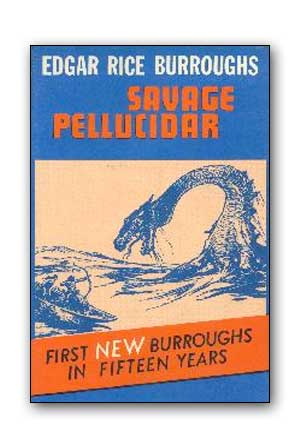 Two explorers from the Earth’s surface had carved themselves an empire at the Earth’s core- Pellucidar. The dangers were many. Untamed tribes and vicious beasts were a constant peril, and there were times when the lives of the surface-men were at stake. But, just when things seemed hopeless, they came up with a trump card-a new weapon. What they didn’t realize was that it was a weapon that could bring its makers to the brink of disaster. A LOST AIRSHIP, A LOST EMPRESS, A LOST WORLD Abner Perry had invented the Iron Mole which dug into the crust of the Earth to plunge into the hollow interior world, eternally lit by a central sun, and inhabited by caveman and cave beasts. This was Pellucidar and, in it, Abner and his friend David Innes carved themselves an empire. Abner’s introduction of aeronautics into SAVAGE PELLUCIDAR was to plunge David and his primitive empress, Dian, into the danger of a series of new adventures among the unexplored lands and untamed tribes. This is the last novel of Pellucidar that Edgar Rice Burroughs ever wrote.