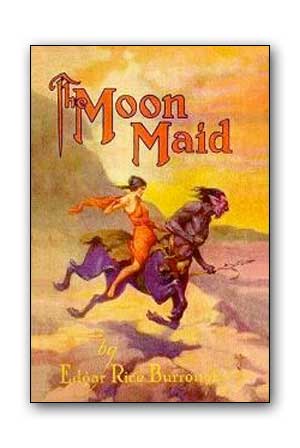 The first manned spaceship to reach the moon discovered a world hidden from human eyes – a world of flying women, of comical cities, and of semi-human monsters who fought for power across these eerie Lunar plains. These men must battle the conflict between themselves and their alien hosts amidst the high adventure that waited for the rescue of the moon maid. After a century of war, all Earth was at peace at last, and friendly communication had been established with the planet Mars. Interplanetary co-operation made possible what neither world had been able to achieve alone — ships to bridge the distance between the worlds. But The Barsoom, the first Earth-Mars vessel, was treacherously sabotaged, thrown off course, and obliged to make an emergency landing on the moon. And there, beneath the craters, at the interior of the arid satellite, the crew found a world cut off from the rest of the solar system, inhabited by warring The Moon Maid monsters, and the decaying remnants of an ancient civilization.