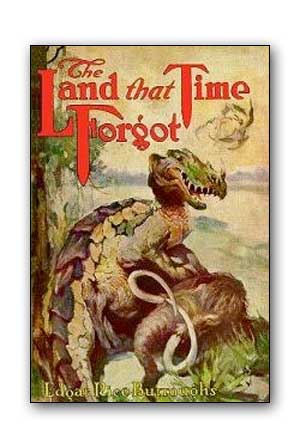 The Land That time forgot

Bowen Tyler’s fabulous adventure began with a terror-haunted trip as a captive in an enemy submarine-only to end on the rocky shores of a monster-ridden lost world where Time had stopped.

“…I have experienced a cosmic cycle, with all its changes and evolutions for that which I have seen with my own eyes in this brief interval of time-things that no other mortal eye had seen before, glimpses of a world past, a world dead, a world so long dead that even in the lowest Cambrian stratum no trace of it remains. Fused with the melting inner crust, it has passed forever beyond the ken of man other than in that lost pocket of the Earth whither fate has borne me and where my doom is sealed.”

Thus begins one of the most thrilling science-fiction series that the creator of Barsoom and Tarzan ever conceived-the epic of the lost continent of Caprona and of the American who first set foot there.