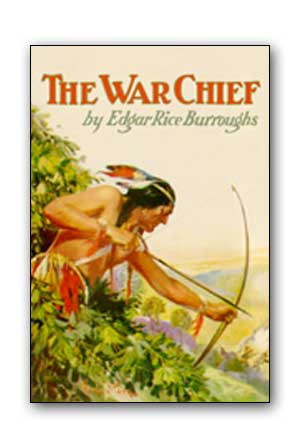 THE WAR CHIEF is a realistic historical novel about life and death on an Apache reservation during the final years of the Apache wars until the death of Cochise and the surrender of Geronimo. The story focuses on Andy MacDuff, an infant kidnapped by the Apaches in a raid, adopted by Geronimo and renamed Shoz-Dijiji, or Black Bear. He is given a proper Apache upbringing, including initiation into all the rites and responsibilities of Indian Manhood. He excels at the crucial skills of hunting and warfare, shows himself to be strong and courageous, and soon is made a highly prized war chief. During his apprenticeship, Shoz-Dijiji falls in love with Ish-Kay-Nay, an Apache maiden, who, unfortunately is coveted by another Apache chief, Juh, who hates Shoz-Dijiji for being Geronimo’s favorite. Burroughs’ great respect for the West and compassion for the exploitative treatment of the Indians the hands of the treacherous pin-dah-lickoyee (“white eyes”) is manifested throughout this honest, vivid, and sympathetic portrait of the West that does credit to both the Indians and Edgar Rice Burroughs.