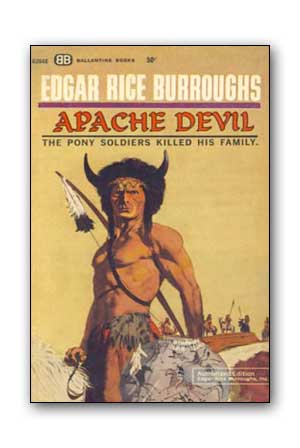 Shoz-Dijiji, or Black Bear, kidnapped by the Apaches from his white pioneer family as an infant and raised by Geronimo, is now a brave and accomplished Apache War Chief. In addition to the skills of hunting and warfare he has learned to hate violently the pin-dah-lickoyee (“white eyes”) from witnessing their consistently wretched treatments of the Apaches: violation of treaties, forced imprisonment on reservations, and economic exploitation. Shoz-Dijiji is also embittered by bereavement over the death of a young Indian maiden he had loved. He becomes notorious as the blood thirsty Apache Devil a daring and intrepid raider, His adventures bring him together with Wichita Billings, a tough-minded white frontier girl, and they reluctantly fall in love, despite seeming culture and racial differences. But the main action of the novel is the final pursuit and surrender of Geronimos to General Miles chronicled here in grim and realistic detail. APACHE DEVIL is remarkable for it’s honest and sympathetic treatment of Apache life at a time when almost everyone else portrayed the Apaches as devil incarnate; it is an epic worthy of Apache Devil an exciting but tragic era of American history.