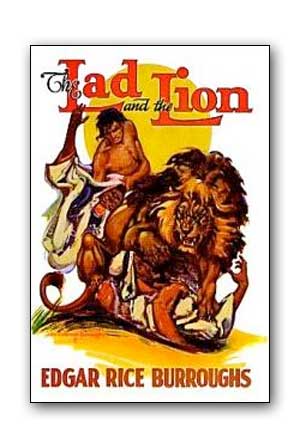 The Lad and the Lion

In a remote European kingdom, plotters moved toward the murder of an old king and his grandson and heir, Michael. But the old monarch was wise, and before he could be killed, he arranged for the boy would be cast adrift to be picked up by a madman on a derelict vessel. The life of the young deposed king is preserved by a miracle, forcing him to grow up on a derelict ship in companionship with a young lion. Eventually the winds and currents deposit the strange pair on the coast of Africa, and the youth learns the lessons of the wild, helped by his closest friend and loyal protector, the giant black maned lion. Michael came of a long line of courageous ancestors. Though he had no memory of his background, he survived the attacks of the lunatic, and even contrived to protect the only other inhabitant of the drifting ship- a monstrous, black maned lion. And when Michael and his friend eventually reached the shores of Africa, it was the giant feral cat who became the protector and teacher. Together the two, man and beast, ranged the new found country, hunting skillfully as a pair, unconcerned with any problems except those of day-to-day living in the primeval forest. Until one day, for the first time, Michael encountered other humans. This was when he learned how truly noble The Lad and the Lion the king of the beasts could be.