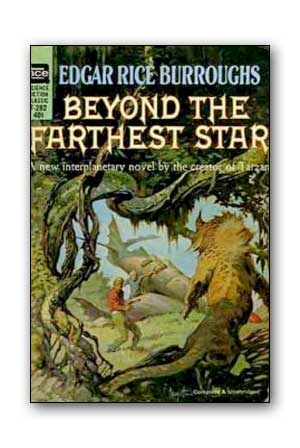 Beyond the Farthest Star

AT THE EDGE OF THE COSMOS — Of them all Poloda was the most distant literally BEYOND THE FARTHEST STAR our telescope could view! Yet on Poloda, appeared an American of our own time, to take part in thrilling adventure after another in the battles of that wartorn world. Tangor was the name the people of the planet BEYOND THE FARTHEST STAR gave him. What his American name was he preferred not to reveal, for his family on Earth thought him dead, shot down heroically battling the Nazi warplanes over Europe.

But he was not dead. Instead, like John Carter, he found himself on the surface of another world, not Mars, not any in our system, but a world inhabited by men and women, great civilizations, and strange beasts. In this world, Tangor met his greatest challenge, for there,too, war was so vast, so entrenched, that it had become a way of life.