(May 19th, 2014 – Tarzana, CA & Mt. Laurel, NJ) Edgar Rice Burroughs, Inc., the company founded by the author to protect and maintain his literary creations, and one of the comics industry’s leaders, Publisher Dynamite Entertainment, announced today a comprehensive agreement that will see the return of Burroughs’ original “John Carter: Warlord of Mars” to the pages of comic books, comic strips and graphic novels. The agreement allows for the world-wide publication of the John Carter universe as well as “Lord of the Jungle” and ERB’s library of archival material.

The initiative comes on the heels of the reacquisition of comic book rights by Edgar Rice Burroughs, Inc. that had been held by Walt Disney Pictures and its Marvel Entertainment subsidiary, as well as a recent legal settlement with Dynamite that cleared the way for Dynamite to introduce key characters and plot elements from the John Carter back story that were, until now, absent from recent comic book interpretations.

“It was important to us that we reacquire the comic book and comic strip rights from Marvel Entertainment so we could reintroduce them in the market place. We’re excited to see the exploits of Edgar Rice Burroughs’ first science fiction adventure hero brought to life in their fullness by the passionate creative talents assembled by the folks at Dynamite,” said James Sullos, President of Edgar Rice Burroughs, Inc. “They’re true fans – and it shows on every page and in every idea they’ve shared with us. Now fans everywhere will be able to appreciate the original adventure stories that later spawned Flash Gordon, Superman, Star Wars and Avatar.”

“Working together with Jim and the team at ERB, we will be taking the worlds of John Carter and The Lord of the Jungle publishing initiatives to a new level. I cannot wait to announce the creative teams behind each series in the coming months. This is the beginning of a great relationship.” states Nick Barrucci, CEO and Publisher of Dynamite Entertainment. “I can’t express how happy and excited everyone at Dynamite is to be working hand in hand with everyone at ERB, Inc.” 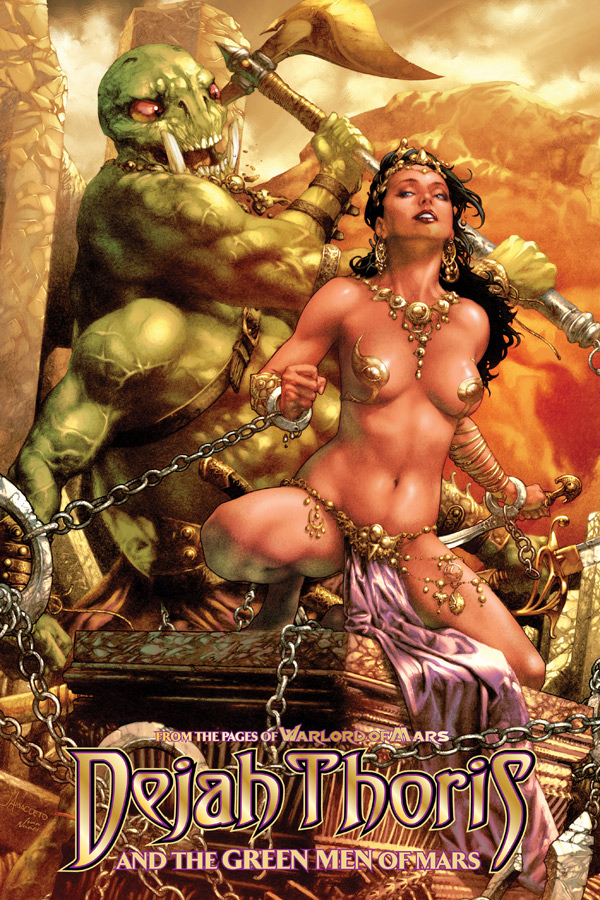 John Carter debuted in 1912 as the lead character in Edgar Rice Burroughs’ first novel, serialized as Under the Moons of Mars in the pulp magazine, The All-Story, and later published as a complete novel retitled A Princess of Mars. The character excited the imagination of readers and quickly imprinted onto the public psyche. As many literary and popular culture scholars attest, John Carter served as the template for a litany of adventure heroes to follow, from Flash Gordon, Buck Rogers, and Superman to the Jedi knights of Star Wars fame and most recently, Avatar.

In planning for a late 2014 relaunch, Dynamite Entertainment confirmed that the new comic book series will be titled John Carter: Warlord of Mars. Dynamite will also republish other John Carter assets, going back as far as the early 1940s comic strips by John Coleman Burroughs, the son of Edgar Rice Burroughs. 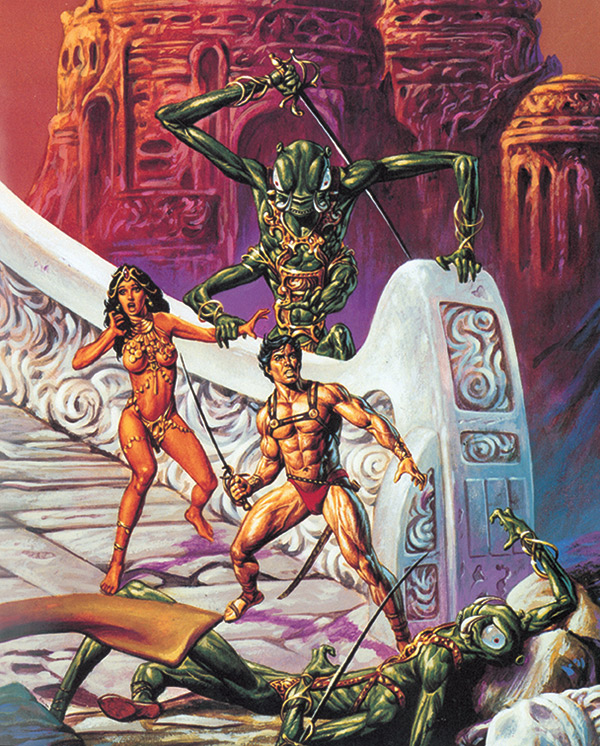 In a related development, new John Carter: Warlord of Mars “adventure strip” episodes will make their online debut in early summer as part of the Edgar Rice Burroughs Digital Comic Strip Service at edgarriceburroughs.com/comics. Written by the legendary Roy Thomas, with art by Pegaso (Rodolfo Perez Garcia) of Mexico City, this series will invite readers to accompany John Carter and his compatriots on exciting adventures that delve into the rich, storied history of Barsoom (as the inhabitants of Mars refer to their planet). As with the other nine series featured on the site, including Tarzan and Carson of Venus, the first four episodes of John Carter: Warlord of Mars will be viewable at no charge.

Dynamite was founded in 2004 and is home to several best-selling comic book titles and properties, including The Boys, The Shadow, Vampirella, Bionic Man, A Game of Thrones, and more. Dynamite owns and controls an extensive library with over 3,000 characters (which includes the Harris Comics and Chaos Comics properties), such as Vampirella, Pantha, Evil Ernie, Smiley the Psychotic Button, Chastity, Purgatori, and Peter Cannon: Thunderbolt. In addition to their critically-acclaimed titles and bestselling comics, Dynamite works with some of the most high profile creators in comics and entertainment, including Kevin Smith, Alex Ross, Neil Gaiman, Andy Diggle, John Cassaday, Garth Ennis, Jae Lee, Marc Guggenheim, Mike Carey, Jim Krueger, Greg Pak, Brett Matthews, Matt Wagner, Gail Simone, Steve Niles, James Robinson, and a host of up-and-coming new talent. Dynamite is consistently ranked in the upper tiers of comic book publishers and several of their titles – including Alex Ross and Jim Krueger’s Project Superpowers – have debuted in the Top Ten lists produced by Diamond Comics Distributors. In 2005, Diamond awarded the company a GEM award for Best New Publisher and another GEM in 2006 for Comics Publisher of the Year (under 5%) and again in 2011. The company has also been nominated for and won several industry awards, including the prestigious Harvey and Eisner Awards. For art and more information, please visit: dynamite.com/

Founded in 1923 by Edgar Rice Burroughs himself, Edgar Rice Burroughs, Inc. holds numerous trademarks and the rights to all literary works of the author still protected by copyright. The company has overseen every adaptation of his literary works in publishing, film, television, theatrical stage productions, licensing and merchandising. The company is still a very active enterprise and manages and licenses the vast archive of Mr. Burroughs’ literary works, fictional characters and corresponding artworks that have grown for over a century. The company continues to be owned by the Burroughs’ family and remains headquartered in Tarzana, California, the town named after the Tarzana Ranch Mr. Burroughs purchased there in 1918 which led to the town’s future development. For more information, please visit EdgarRiceBurroughs.com.