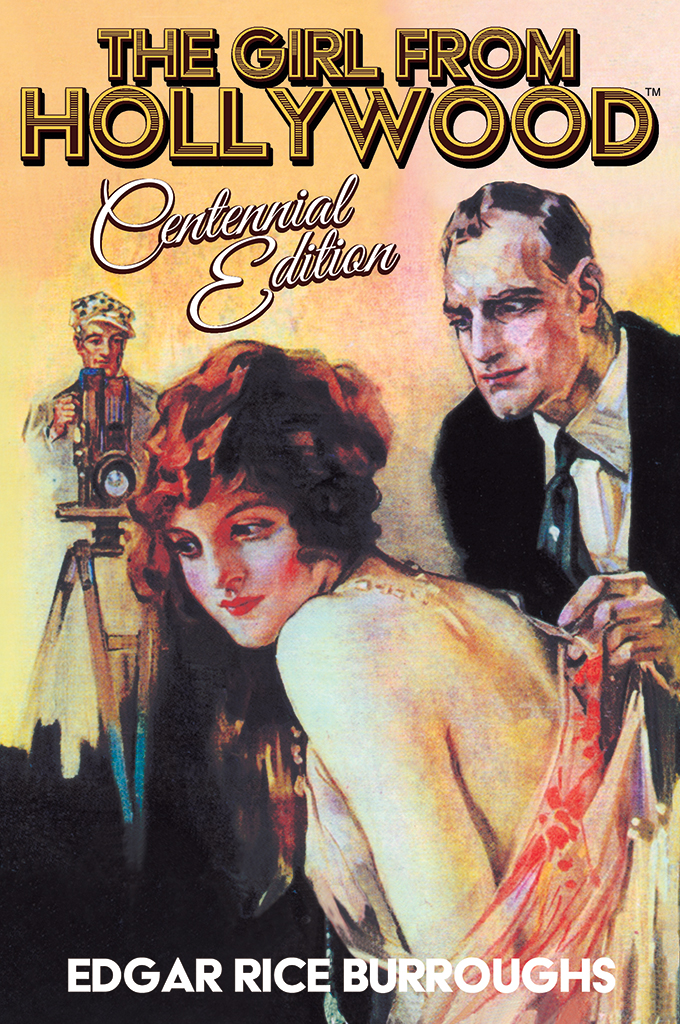 In 1921, Edgar Rice Burroughs wrote a novel unlike any other in his entire catalog—a sordid tale of drug addiction, corruption, and murder set against the backdrop of Prohibition-era Hollywood. He believed it to be one of his finest works, written as it was from his own experience after he and his family moved to their Tarzana Ranch in Southern California and became exposed to both the allure and perils of nearby Tinseltown. Now, celebrate the hundredth anniversary of this timeless work in The Girl from Hollywood Centennial Edition, featuring a new foreword by Michael D. Sellers (author of John Carter and the Gods of Hollywood), a specially commissioned frontispiece by renowned artist Douglas Klauba, classic cover art by P. J. Monahan, and rare and never-before-seen bonus materials from the archives of Edgar Rice Burroughs, Inc., in Tarzana, California.

The Girl from Hollywood Centennial Edition will be available in a paperback and a hardcover Collector’s Edition. The book is expected to ship Spring 2021.

Preorder your copy of The Girl from Hollywood Centennial Edition today!

Dark Side of Hollywood

She is known by the stage name Gaza de Lure, an icon of the silver screen—the epitome of success for every aspiring actress who dreams of becoming a star in Hollywood. No longer is she Shannon Burke, the innocent Midwestern girl who moved to California seeking fame and fortune, for in her heart she holds a dark secret…one so dreadful, so shameful, that she can never hope to escape its grasp. When the Penningtons, a wholesome ranching family from the nearby foothills, come into her orbit, will they too become forever trapped in the tangled web of Hollywood corruption, drug peddling, addiction—and murder? 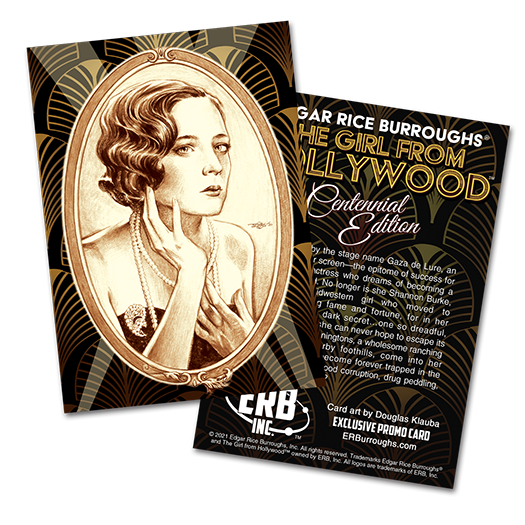 All orders of the hardcover Collector’s Edition of The Girl from Hollywood placed directly from ERB, Inc.’s online store will come with an exclusive collectible trading card featuring the brand-new frontispiece artwork by Douglas Klauba, which depicts Shannon Burke, the title character in the novel.

The hardcover Collector’s Edition is limited to only 200 copies and will feature a special Girl from Hollywood Centennial bookplate signed by artist Douglas Klauba and Michael D. Sellers, the author of the foreword, as well as by James Sullos (President, ERB, Inc.), Cathy Wilbanks (Vice President of Operations, ERB, Inc.), and Christopher Paul Carey (Director of Publishing, ERB, Inc.), all of whom contributed to the publisher’s preface.

Get this special offer by preordering The Girl from Hollywood Centennial Edition from our online store and selecting the option for the hardcover Collector’s Edition. 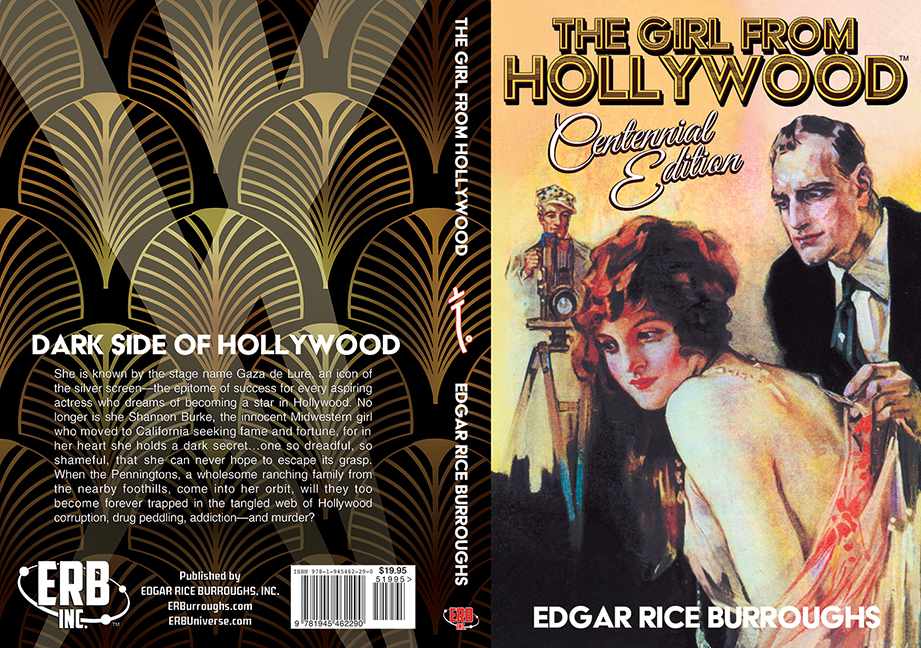 Celebrating 100 years of a classic novel 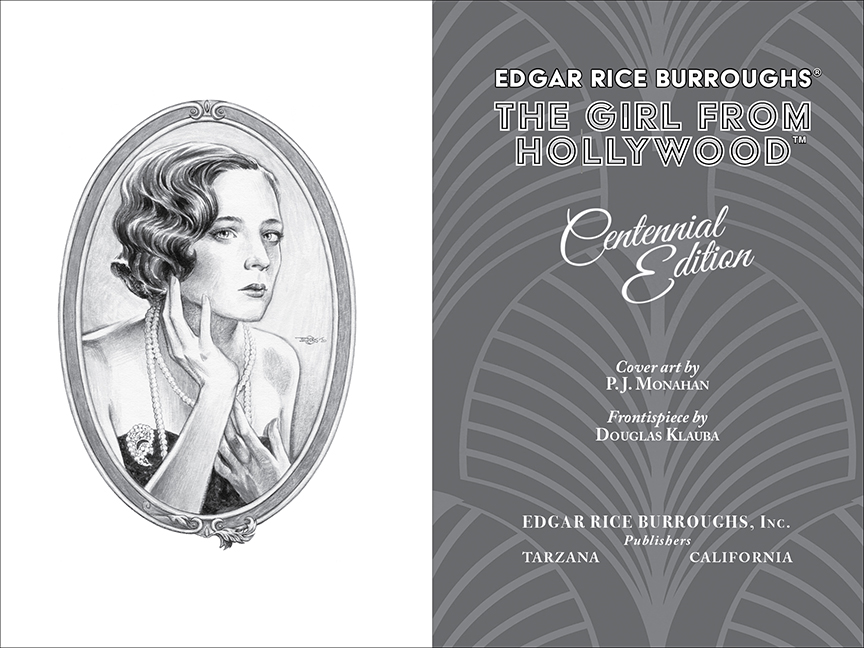 To celebrate the centennial of this classic novel, we are also releasing an array of The Girl from Hollywood merchandise at our Zazzle storefront, including puzzles, notebooks, playing cards, iPhone cases, Christmas ornaments, and more!

Michael D. Sellers is a filmmaker based in Los Angeles with more than twenty feature films to his credit as producer, writer, and/or director, including the award-winning Vlad and Eye of the Dolphin. Prior to his film career, he served for eleven years as an undercover CIA officer, serving in Moscow, Warsaw, Ethiopia, and the Philippines. He was awarded the CIA Intelligence Commendation Medal for his actions during a violent coup attempt experienced during one of his assignments. He credits Edgar Rice Burroughs for imparting to him a spirit of adventure, and tolerance for misadventure, that has been a constant theme of his life. In 2012, he wrote John Carter and the Gods of Hollywood, which chronicled the history of ERB’s A Princess of Mars from conception through the completion and release of Disney’s John Carter film directed by Andrew Stanton. Most items on his bucket list have a check mark beside them, but one that remains is to make a documentary film that he would entitle The Life and Mind of Edgar Rice Burroughs.

An award-winning illustrator, Douglas Klauba was born and raised in Chicago, and is a graduate of the American Academy of Art. His paintings have been included in the art annuals of Spectrum: The Best in Contemporary Fantastic Art, the Society of Illustrators, and Imagine FX magazine. He was Artist Guest of Honor at the 2016 Burroughs Bibliophiles Dum-Dum convention, and he previously provided artwork for the books Tarzan Trilogy, Untamed Pellucidar, and Tarzan and the Valley of Gold published by Edgar Rice Burroughs, Inc.

P. J. Monahan was one of the most prolific pulp magazine illustrators of the early twentieth century. In addition to providing the dust jacket art for the first hardcover edition of The Girl from Hollywood, Monahan illustrated many other works written by Edgar Rice Burroughs, including the first edition of Thuvia, Maid of Mars and thirteen covers for stories appearing in The All-Story, All-Story Weekly, Argosy All-Story Weekly, and All-Story Cavalier Weekly.

For those who preordered Tarzan books #9–12, we are waiting for the books to ship from the printer to our warehouse. While we had initially hoped for a February release, it’s looking more likely that they will ship to customers beginning in March. The good news is we have really loaded up these new volumes with even more fantastic bonus materials, significantly increasing the length and scope of afterwords and archival images. In addition, we’re excited to announce that the “From the Archives” section of our ERB Authorized Library edition of Tarzan and the Lost Empire will include Edgar Rice Burroughs’ previously unpublished 16-page screen treatment for a proposed, but never realized, film version of this classic Tarzan novel!