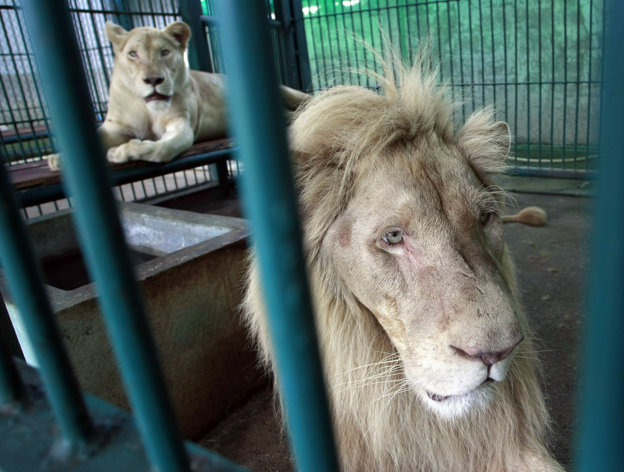 Lions rest inside an enclosure after a raid at a zoo-like house on the outskirts of Bangkok, Thailand Monday, June 10, 2013. Thai police and forestry officials searched and seized a number …more of imported and endangered animals including 14 lions from Africa and arrested the house’s owner. (AP Photo/Apichart Weerawong)

They said Montri Boonprom-on, 41, faces charges of possessing wildlife and carcasses and could face up to four years in jail and a fine of 40,000 baht ($1,300).

Thailand is a hub of the international black market in protected animals. While the country is a member of a convention regulating international trade in endangered species, Thai law does not extend protection to many alien species.

Police also found a hornbill and a leopard, both protected by Thai law, which were packed in a box and were scheduled to be delivered to clients on Monday.

“We have been monitoring the location for a few days after the neighbors complained about the noise from the animals,” Ek told reporters during the raid in a residential area of Bangkok’s Klong Sam Wa district. “And if you looked through the gate, you could spot lions in the cage.”

Montri told reporters the lions were shipped legally to Bangkok from Africa and were waiting to be moved to a zoo in Thailand’s northeast. He did not explain why only 14 lions remained at his warehouse, while the documents showed he had imported 16.

The animals were confiscated and will be under the care of the Department of Natural Parks, Wildlife and Plant Conservation.

NO COPYRIGHT INFRINGMENT IS INTENDED.