Exclusive Trading Card Offer Only When Ordering from ERB, Inc.

Tarzana, California (October 27, 2020) –The groundbreaking Edgar Rice Burroughs Universe series continues with Tarzan: Battle for Pellucidar by Win Scott Eckert—the second novel in the Swords of Eternity super-arc, a cycle of all-new canonical novels expanding Edgar Rice Burroughs’ worlds of wonder and adventure! The book is now available to order directly from ERB, Inc. Softcover and hardcover editions, as well as a limited Collector’s Edition with a signed bookplate, are now available in a simultaneous release. Please note that the Collector’s Edition is selling fast, so place your order now while we still have copies in stock.

Tarzan of the Apes, Jason Gridley, and the crew of the airship O-220 return to Pellucidar, the world at the Earth’s core, on a wartime mission to stop the Nazis from obtaining a powerful superweapon. But when the Lord of the Jungle’s murderous adversaries partner with the Mahars—Pellucidar’s routed reptilian overlords—and his adventurous granddaughter Suzanne goes missing on a reconnaissance mission, can Tarzan prevent the conquest and enslavement of all humanity in both the inner and outer worlds?

Hurled through time and space from her homeworld of Pellucidar, Victory Harben plummets into peril when she finds herself on the island continent of Caspak, the Land That Time Forgot. Using skills learned from both her friend Tarzan and the Stone Age land of her birth, Victory fights for her very survival against savage beasts and uncanny Wieroos, the winged humanoid terrors of Caspak. But that is only the beginning of her trials, as a strange visitor arrives with an omen of Victory’s role in the machinations of the Swords of Eternity super-arc!

Win Scott Eckert is the legacy author of science fiction Grand Master Philip José Farmer’s Patricia Wildman series, as well as the coauthor with Farmer of the upcoming Doc Caliban novel, The Monster on Hold. Eckert’s other professional credits include authorized tales of Zorro, the Phantom, Honey West, the Avenger, and the Green Hornet. A lifelong Edgar Rice Burroughs reader, he lives in Colorado with his wife and a bevy of four-legged family members.

Mike Wolfer, a professional writer and comics illustrator for over thirty years, has been a key talent working on the Edgar Rice Burroughs Universe comic books for American Mythology Productions, including Pellucidar, The Land That Time Forgot, and The Moon Maid. Best known for his Widow series, Wolfer is the creator of the Daughters of the Dark Oracle series and the horror anthology Crypt of Screams, and has worked on numerous licensed properties.

Chris Peuler is a genre illustrator based in Chicago, working primarily in fantasy and science fiction. A traditionally trained digital painter, Chris has created vivid imagery for various gaming and book publications. He has previously provided the cover art for Edgar Rice Burroughs, Inc.’s editions of Carson of Venus: The Edge of All Worlds by Matt Betts, Swords Against the Moon Men by Christopher Paul Carey, and A Soldier of Poloda: Further Adventures Beyond the Farthest Star by Lee Strong. 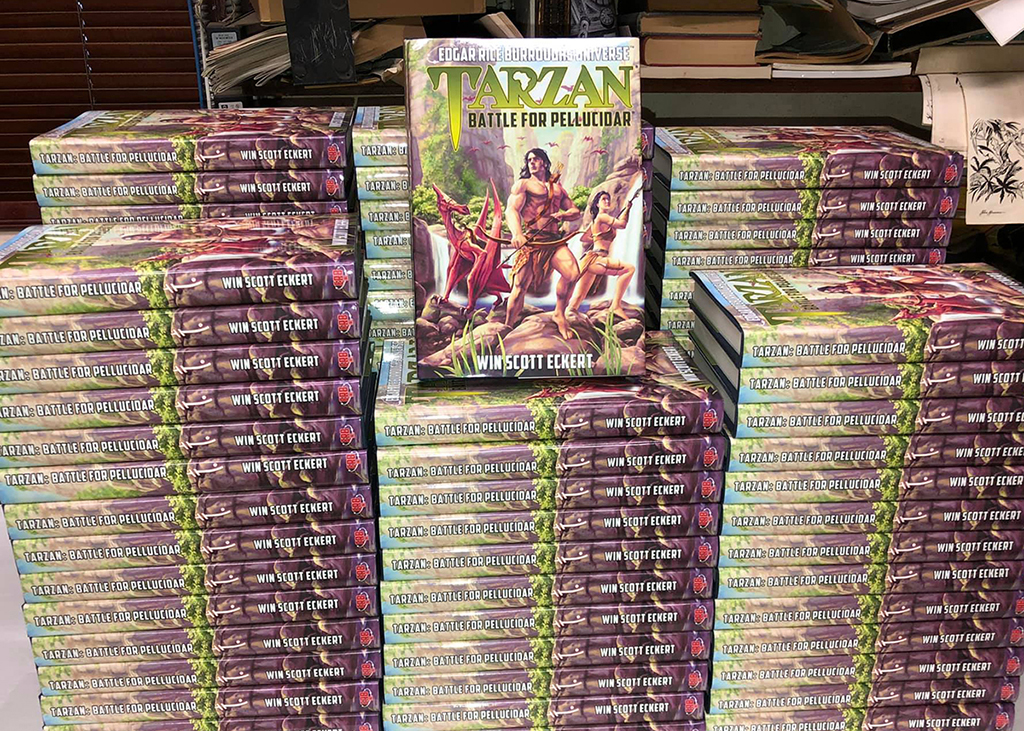 Enter the Edgar Rice Burroughs Universe and join the adventure—order your copy of Tarzan: Battle for Pellucidar today!