“I had this story from one who had no business to tell it to me, or to any other.” With that opening line, Edgar Rice Burroughs’ story of an orphaned baby raised by apes in equatorial Africa created a cultural phenomenon over 100 years ago. Today, Edgar Rice Burroughs, Inc. launches a new online comic strip to commemorate this classic story.

True to the book, the new TARZAN OF THE APES comic strip will be a classic adaptation of this universally known story of survival, self-reliance, romance and freedom from societal norms. Written by Roy Thomas, drawn by Pablo Marcos with coloring by Oscar Gonzalez, this strip will intrigue you.

In the novel, John Clayton was born in the western coastal jungles of equatorial Africa to a marooned couple from England, John Clayton Sr. [Lord Greystoke] and Alice Rutherford Clayton [Lady Greystoke]. After his parent’s death (Lord Greystoke is killed by the savage king-ape Kerchak) baby John is adopted by Kala, the fierce she-ape, who names him “TARZAN” meaning “white skin” in ape language. Raised to manhood by Kala who loved him dearly, baby TARZAN remains ignorant of his human heritage. 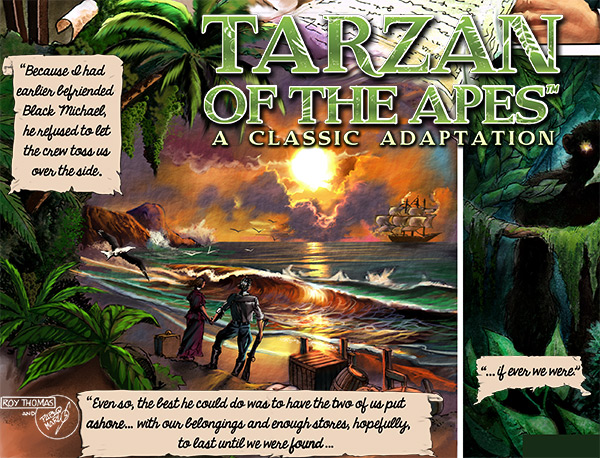 Deep in the wild African jungle, TARZAN learns survival secrets: how to talk with animals, swing through the trees, and fight against the powerful predators surrounding him. TARZAN grows to the strength and courage of his fellow apes. In time, his human intelligence promised TARZAN the kingship of the tribe. And, after a fight to the death with the king-ape Kerchak, TARZAN truly became Lord of the Jungle and King of the Apes.

Eventually, outsiders finally penetrate the jungle, bringing with them the wantonness of “civilized” greed and lust – but also the first white woman Tarzan had ever seen. Suddenly, Tarzan must choose between two worlds. Later, when asked how he came to be in this savage jungle, Tarzan replied, “I was born there. My mother was an ape, and of course she couldn’t tell me much about it. I never knew who my father was.”

Adventure and discovery await! View and read free samples at www.edgarriceburroughs.com/comics and then subscribe for just $1.99 per month to have access to all these fabulous new weekly comic strips of adventure and romance – all in vivid color by some of the grandmasters of comic strip production.