Tuñon Benzo’s first influence was an uncle teaching him to read and write with the Sunday Tarzan comics in the local newspaper, El Tiempo, in his native city, Cartagena, in Columbia. Tuñon lets himself go and get into that magical universe of comics and is now a committed comic artist for life despite having worked as a painter in collective and individual exhibitions and a graphic designer working for several advertising agencies in Cartagena.

Tuñon studied with Modern Schools, Inc. and at a school for fine arts. He has worked on: The New Futbol of Colombia; John Paul II the Traveling Pope; Joaquin Gutierrez Pride of Colombia; Simon Bolivar the Liberator; Mompox Valerosa City and Benemerita of the Motherland; Literary Cart, and Citizen Security. Colombian Amercian Actress, Paula Garces, hired Fabian to work on her very popular comic book titled “The World of Aluna.” Other publications he has worked on include: History of Boxing; Calarca; Galaxtica; History of Jesus (El Universal newspaper); and collaborates with Graphic Jokes for the newspaper Freedom, Cartagena de Indias, Pambele, Diomedes Diaz, Simon Bolivar, Jokes (The Sun newspaper). See his website at http://tunonbenzo.com/

Maggie is a 21-year-old from Asunción-Paraguay. She is a Graphic Design student as well as a rising artist with a big interest in the comic and animation industry. See her work on Carson of Venus beginning at #121 – out today. 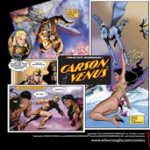 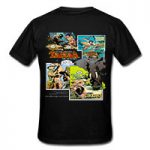