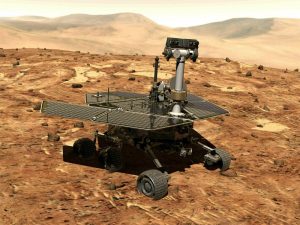 CAPE CANAVERAL, Fla. (AP) — NASA’s Opportunity, the Mars rover that was built to operate for just three months but kept going and going, rolling across the rocky red soil, was pronounced dead Wednesday, 15 years after it landed on the planet. The six-wheeled vehicle that helped gather critical evidence that ancient Mars might have been hospitable to life was remarkably spry up until eight months ago, when it was finally doomed by a ferocious dust storm.

Read the Full Story at AP News. (Photo by NASA via AP)