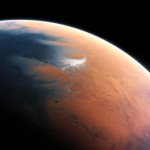 Phobos is getting closer and closer to Mars, and it’s liking the fall so much that it might just put a ring on it. Astronomers think that in 20 to 40 million years, Phobos will break apart, giving the Red Planet a ring comparable with the outer planets of the Solar System.

According to the research, published this week in Nature Geoscience, Phobos is being pulled apart by Mars’ gravity. The closer it gets to the Red Planet, the more intense these forces will be. If the moon breaks apart before it enters the Martian atmosphere, it would create a long-lived ring system, capable of remaining stable for millions of years.