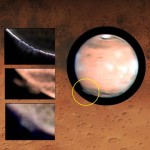 DailyMail reports on (yet another) strange Dome found on Mars:

There’s a set of UFO hunters who are convinced that Nasa is covering up the remains of an ancient civilisation on Mars.

In the hope of backing up their bizarre theory, they’ve spotted what they believe to be everything from military bunkers to coffins on the red planet.

Their latest ‘sighting’ of a rock by the Opportunity rover described as a ‘man-made dome’ that they say was left behind by an alien race sometime during Mars’ watery past.