Returning to the spotlight for the first time in a century, Edgar Rice Burroughs’ classic rough ‘n tumble man of action, The Mucker, is set to make his digital debut on Saturday, January 18, 2014, in an all-new adventure strip ­written by Ron Marz and drawn by Lee Moder.

The announcement of the new web comic strip – available exclusively online at EdgarRiceBurroughs.com/comics – was made today by representatives of Edgar Rice Burroughs, Inc., the company founded by the author himself to protect and maintain his works for generations. 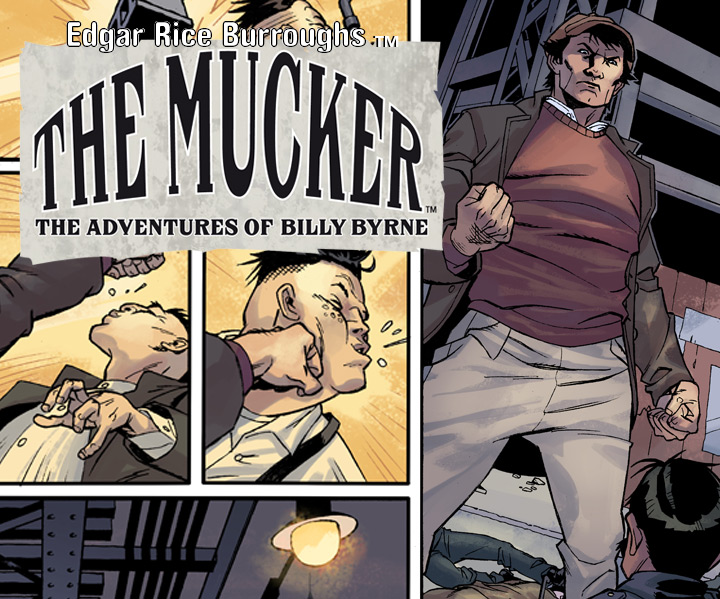 “I grew up on the works of Edgar Rice Burroughs and, to a large extent, I’m the kind of writer I am because of Edgar Rice Burroughs,” said writer Ron Marz, known for his work on Silver Surfer, Green Lantern and Witchblade, among others. “I’m following not only in his footsteps, but in those of so many other creators who have left their mark on these concepts and characters. My job is to make these stories worthy for existing fans and completely accessible for new fans.”

Though not as well-known as Burroughs’ other works of science fiction, fantasy and adventure, like Tarzan of the Apes and John Carter of Mars, The Mucker is a unique story about the exploits of Burroughs’ only anti-hero – Billy Byrne, a brash and brawling street tough from Chicago’s West Side – grounded in the harsh realities of life in the slums of the early 1900s. Decades before Indiana Jones uncovered the Lost Ark and Rambo fought his personal guerrilla wars, the ruthless Mucker would find himself on whatever side of the law suited his savage nature, taking on crooked fight promoters, brutal gangsters, sinister kidnappers, ferocious headhunters and a femme fatale or two.

Artist Lee Moder, known for his work on Legion of Superheroes, Wonder Woman and Stars and S.T.R.I.P.E., combines a classic sense of design, setting and anatomy with a flair for exciting storytelling. “Lee has already filled sketchbooks with designs and research for The Mucker, getting a feel for the characters and the settings,” said Marz. “It really shows in the finished strips.”

Based on the original novels, the first four strips will be available online for free at EdgarRiceBurroughs.com/comics beginning Saturday, January 18, 2014. All upcoming episodes, and many others, may be enjoyed anytime, anywhere for just a $1.99 a month, with a subscription to the official Edgar Rice Burroughs’ Digital Comic Strips service. Regularly updated and expertly curated, the service currently features numerous, all-new adventure series based on classic Burroughs stories including Tarzan, Pellucidar, The Eternal Savage, The Land that Time Forgot and Carson of Venus.

“Hardcore Burroughs fans consider The Mucker one of his [Burroughs] best works,” added Marz. “Adapting these novels gives me a chance to expose a great story to an audience who might not be familiar with it.”

Watch for more announcements next month. Just $1.99 per month. See free samples of all the strips and subscribe at www.edgarriceburroughs.com/comics.