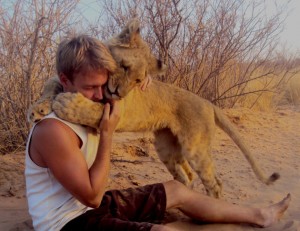 Sirga the 110lb faced starvation after being abandoned by her family – but she’s found herself a new pride in the form of wildlife campaigners Valentin Gruener and Mikkel Legarth.

The majestic big cat treats the two men like she would other lions – playfully leaping on their shoulders and wrestling with the two adults.

With their help, the lioness can now hunt for prey on her own.

She is now a beacon for hoped success of the Modisa Wildlife Project, founded in Botswana, Africa, by Valentin and Mikkel with the hope of saving the lion population.

Conservationist Mikkel, 30, said his bond with Sirga was just like as if she was part of his pride.

He said: ‘A pride had three cubs and two were killed before Sirga was abandoned without food. It happened on our land and we could not standby and watch her die.

‘We didn’t want Sirga to become like other lions in captivity, constantly fed by streams of tourists. She only interacts with me and Valentin.

‘She hunts her own food, taking antelopes and she will let us be near her when she eats it which is remarkable.’

Mikkel and Valentin’s work has now been documented by photographer Nicolai Frederik Bonnén Rossen, who himself got up-close-and-personal with the magnificent predators. 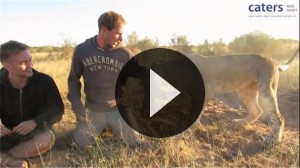 Mikkel added: ‘Sirga doesn’t mind people, but she doesn’t pay them any attention. Wild lions are scared of people, the problem comes if you release a lion that is used to people in the wild, that can cause problems.

‘With Sirga we want to release her to the wild eventually as a wild lion not as one that has met lots of people. That would be dangerous.’

The Modisa Wildlife Project aims at removing lions from areas where they face certain death after coming into conflict with farmers.

Mikkel said: ‘If you release wild lions somewhere else, they will come straight back to where they were before because there is food there.

‘And if you just dump a pride of lions in the middle of a new territory they will disturb the prides that are already there.’