The Guardian has written a nice little piece about Johny Weissmuller, who starred as Tarzan in six different movies for MGM in mid 1955s. But few know he was also a highly-accomplished swimmer who set a world-record that went undefeated for some ten years! 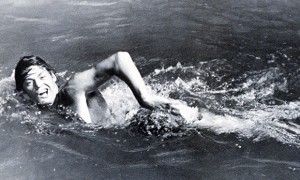 The guy – whose name was Johnny Weissmuller, and who had just been given the role of Tarzan – could definitely swim. In fact, “the world’s greatest swimmer” was true then, and it’s probably still true today. To get a measure of just how good he was, try this single fact for size: in 10 years of competition swimming, Johnny Weissmuller never lost a race. Not once.

Read the full story at The Guardian