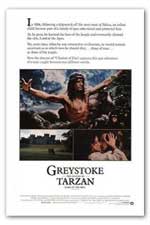 Greystoke, The Legend of Tarzan

The heir to the Earl of Greystoke (Paul Geoffrey) and his wife Alice (Cheryl Campbell) are marooned in Africa. Lady Greystoke gives birth to a son, then she dies and her husband is killed by an ape. Their infant son is adopted and reared by a family of chimpanzees as he grows up naked, wild, and free.

At age 5, Tarzan (Danny Potts) tries to fit in with his ape family. When a black panther attacks, he manages to learn how to swim in order to evade it while another chimp was killed (humans can swim while great apes can’t).

At age 12, Tarzan (Eric Langlois) discovers the tree-house in which he lived as a baby with his mother and father and finds there a wooden block, with pictures of both a man and a monkey (a chimpanzee) painted on it. It is there, after seeing himself in a mirror, that the physical difference between him and the rest of his ape “family” is discovered more fully. He later discovers a hunting knife and how it works. The objects fascinate the naked ape boy who carries them with him.

Years pass and Tarzan (still naked, but now wearing a hunting belt to hold his hunting knife) becomes the dominant male of the ape group. He protects and shows love toward his adopted “mother”, “father” and siblings. He loses one of them to a bunch of natives where he kills one of them.

Years later, a now half-naked Tarzan (Christopher Lambert) is found by Philippe D’Arnot (Ian Holm) who is injured by natives while exploring the surrounding jungle. Tarzan nurses him back to health and D’Arnot teaches him to speak some rudimentary English, albeit with a French accent. D’Arnot knows of the fate of Earl Greystoke and his wife and convinces “Jean” (the French version of John, the name of his father) as he calls him, to return to England with him to reunite with his family.

On arrival at Greystoke, the family estate, Jean is welcomed by his Grandfather the Earl of Greystoke (Ralph Richardson in his last performance on film) and his ward, a young American woman called Jane (Andie MacDowell). The Earl is now elderly and has obviously suffered at the loss of his son and daughter-in-law years earlier, displaying eccentric behaviour and sometimes forgetting that John is not his grandson, but his son returned.

John finds it difficult to be seen as anything but a novelty by the local social set and some of his behaviour is seen as being somewhat threatening and savage. He befriends a young mentally disabled worker on the estate and in his company is able to revert to the more natural physical manners that he was used to in Africa.

Jane takes it upon herself to try to teach John more English, French and social skills (such as table manners and dancing) and the two become very close, making love one evening in secret.

Lord Greystoke seems to enjoy renewed vigour at the return of his grandson and, reminiscing about his childhood game of using a silver tray as a toboggan to travel down the large flight of stairs in the grand house, does so again with disastrous consequences. He dies, apparently from a head injury, in the arms of his grandson, who displays similar emotion and lack of understanding about death as he does earlier in the story when his ape “mother ” was killed in Africa.

At a visit to the National Museum in London John is very disturbed by the crude displays of stuffed animals that he recognises from his upbringing in Africa and, slipping into rooms behind the displays discovers his ape “father” in a cage, having been captured in Africa and brought to England.

They immediately recognise one another and John breaks open the cage and escapes with his ape companion, releasing other caged animals as he does so, pursued by police and museum officials. They make it to a woodland park nearby but the ape is fatally shot and John is devastated to lose yet another whom he loves.

His overall failure to assimilate to human society forces him to make the decision to return to Africa.