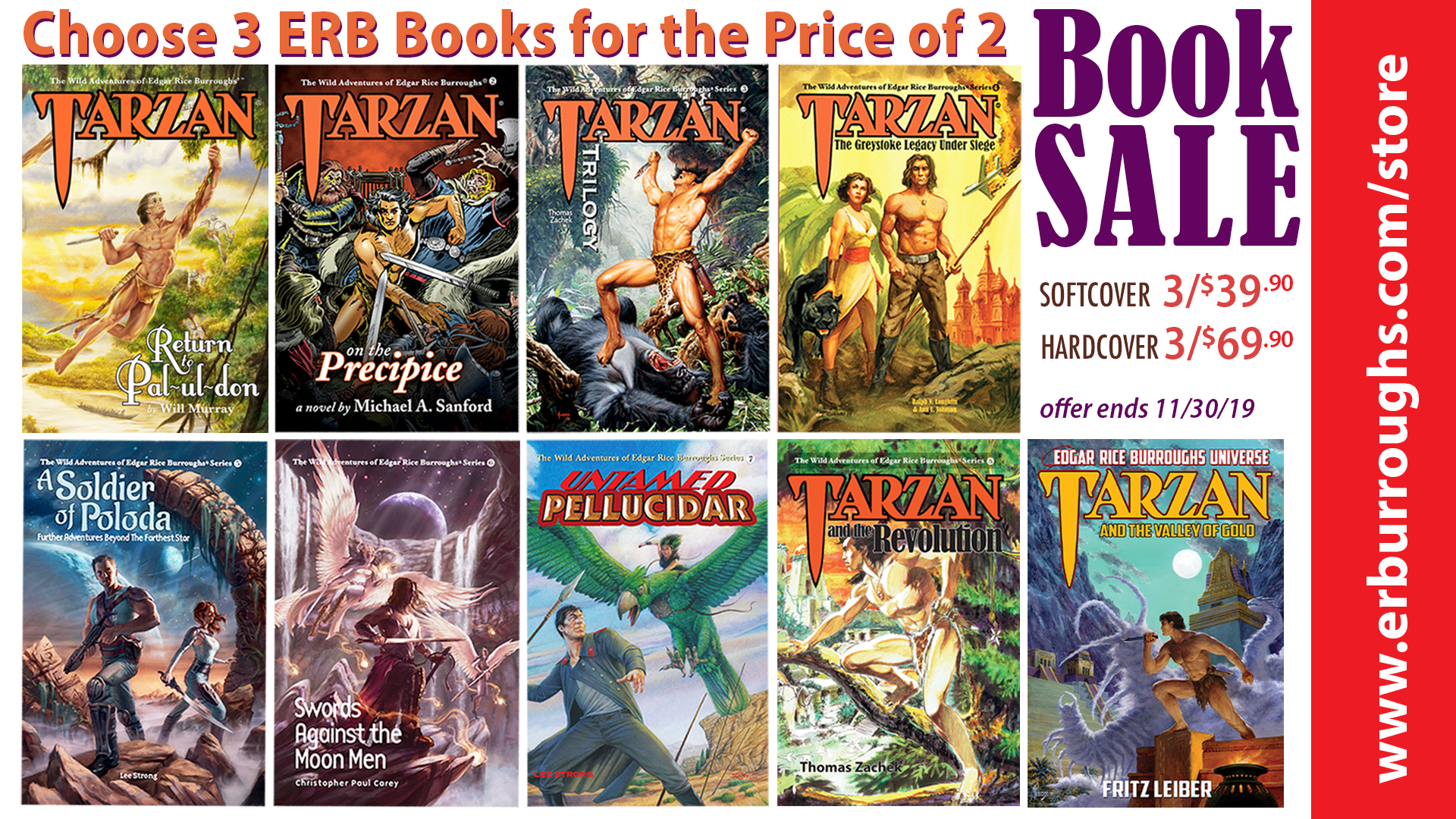 Choose 3 ERB Books for the Price of 2!

OUR NEWEST BOOK – FROM THE EDGAR RICE BURROUGHS UNIVERSE™

Tarzan and the Valley of Gold by Fritz Leiber [only available in hardback]
The burning wreck of a passenger jet with a missing cargo of gold and a desperate plea from a friend lead Tarzan of the Apes deep into intrigue in the jungles of Brazil. Soon the ape-man finds himself facing his most deadly nemesis yet: a criminal mastermind named Vinaro, whose enemies perish in mysterious explosions of gold and flame. But that may be only the beginning of Tarzan’s challenges. For if he is to defeat Vinaro, Tarzan must confront him in the legendary golden city of Tucumai, from where no outsider has ever returned.

#1 Tarzan: Return to Pal-ul-don by Will Murray
With the African continent engulfed by World War II, John Clayton, Lord Greystoke, abandons his role as Lord of the Jungle in order to combat the spreading Nazi menace. Flying a P40 Tomahawk warplane, Clayton is sent on his first mission: to rescue the missing British Military Intelligence officer code-named Ilex. But the daring task plunges him into his savage past after he’s forced down in a lost land that seems hauntingly familiar. When Tarzan of the Apes returns to the prehistoric realm called Pal-ul-don, he must revert to his most savage persona, that of Tarzan-jad-guru—Tarzan the Terrible!

#2 Tarzan on the Precipice By Michael A. Sanford
At the conclusion of the classic TARZAN OF THE APES by Edgar Rice Burroughs, Tarzan is despondent but assured he did what was honorable by enabling Jane to leave with his cousin, William Clayton (who believes he is the rightful heir to the Greystoke estate and can appropriately provide for Jane when they marry). But what then? There has never been an explanation of Tarzan’s activities after his presence in Wisconsin and his voyage back to Africa – until now.

#3 Tarzan Trilogy By Thomas Zachek
Three ALL NEW tales, in one book, featuring Tarzan at Point Station, a remote English outpost near the Waziri homelands. Set during the advent of World War II, we see more and more European intrusion into the Bolongo River Basin. Tarzan becomes embroiled in increasingly dangerous events as cultures clash. With new interior illustrations.

#4 Tarzan: The Greystoke Legacy Under Siege By Ralph N. Laughlin & Ann E. Johnson
Set in the 1980s, The Greystoke Legacy Under Siege lifts the TARZAN series to new, ground-breaking heights with a high adventure that immerses TARZAN and his offspring in an epic battle for their family’s survival. The book also includes a solution to the real-life murder of Dian Fossey, who devoted her life to the study and preservation of African gorillas. With new interior illustrations.

#5 A Soldier of Poloda [Further Adventures Beyond the Farthest Star] By Lee Strong
Worlds at War! American intelligence officer Thomas Randolph is teleported from the World War II battlefields of Normandy into the belly of the evil Kapar empire on the planet Poloda. The Kapar’s only passion is to conquer and destroy the outnumbered Unis forces who had been engaged in a century-long struggle to survive. Rechristened Tomas Ran, the Earthman now understands that the same fierce determination to defeat Hitler must now be used as a weapon to defeat the fascist Kapars – a merciless foe bent on global domination.

#6 Swords Against the Moon Men By Christopher Paul Carey
In this sequel to Edgar Rice Burroughs’ Moon Maid trilogy, Earth has been conquered and humanity brutally enslaved under the cruel tyranny of the Kalkar invaders whose evil was spawned from Va-nah, the Moon’s hollow interior. A desperate plea from Barsoom swiftly hurls Julian 7th upon a lonely quest into the heart of Va-nah where he teams up with a U-ga princess and a fierce alien quadruped, and launches a daring rescue to save a lost Barsoomian ambassadorial mission.

#7 Untamed Pellucidar By Lee Strong
The Soviet government’s Red Army, led by Comrade Trotsky, pursues the retreating White Russian forces into the dangerous world of Pellucidar. Young conscript Kirov, formerly a student anthropologist, finds his escape from the war short lived as he meets the incredible and dangerous Paleolithic animal life of the Northern environs of Pellucidar’s Stone Age world. To survive, Kirov must escape slavery from the beautiful Ala and her mighty Black Birdriders, foster a civil war, impress the natives with his “inventions,” conquer the terrifying Pulka Horde, and become the warlord of several tribes as they flee the Soviet invaders. Untamed Pellucidar is a tale in the grand tradition of Edgar Rice Burroughs’ epic adventures At The Earth’s Core.

#8 Tarzan and the Revolution By Thomas Zachek
Eric Benton, an idealistic young Midwestern Peace Corps volunteer, could hardly have known that his mission to help an African village would embroil him and his colleagues in the political struggles of an emerging African nation. The people of central Africa likewise had no idea how quickly their expectations for freedom could be taken away when a ruthless dictator seizes power. And Tarzan of the Apes had no idea that before long, he would be compelled, once again, to undertake a long and perilous journey with the Waziri to save their families. Set against a backdrop of political unrest in modern Africa, Thomas Zachek’s latest page-turner takes the reader from the dank treasure troves of the lost city of Opar to turmoil in the city streets as Tarzan battles one of his most ruthless foes! 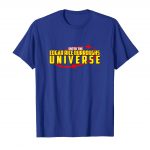 T-shirts featuring your favorite Edgar Rice Burroughs characters—from Tarzan® to Korak™ to John Carter of Mars® to The Lad and the Lion™ to Carson of Venus® and many more—are available in our ERB online store. Also visit our Amazon Store for a wider variety of t-shirts, including our new Edgar Rice Burroughs Universe and Tarzanimals designs as well as additional Tarzan and ERB merchandise!