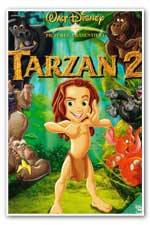 As a young boy being raised by gorillas, Tarzan (voiced by Harrison Chad) is worried that a fabled monster known as the Zugor (voiced by George Carlin) will someday catch him. He is disappointed that he can’t run as quickly as the other young apes in his family, and his attempts to prove himself keep resulting in chaos. When an accident leaves his adoptive mother Kala (voiced by Glenn Close) thinking that Tarzan has died and the other apes feeling that Tarzan has reached a fitting end, the boy believes it best for everyone involved if he runs away.

Alone in the jungle,Tarzan gets chased by Sabor the leopard right to a rocky place known as Dark Mountain, inhabited by two hulking, spoiled gorilla brothers, the dim-witted Uto (voiced by Brad Garrett), the exceedingly violent Kago (voiced by Ron Perlman), and their controlling, over-protective Mama Gunda (voiced by Estelle Harris). But they fear the Zugor as much as Tarzan does, and when the booming call of the monster echoes through the valley, Tarzan is able to escape from them. He encounters a crotchety old gorilla who at first keeps the boy distant, but Tarzan discovers that this old gorilla actually is Zugor, who uses hollow trees as megaphones to amplify his voice and pretend to be a monster to scare other jungle creatures away from his territory and food. Tarzan uses this discovery to force Zugor into letting the boy stay with him. Thanks to Tarzan’s cheerfulness and helpfulness, Zugor begins to warm to him as the boy continues to try to figure out what he is.

Tarzan’s best friends Terk (voiced by Brenda Grate) and Tantor (voiced by Harrison Fahn) come looking for him, but Tarzan does not want to return home with them. It is only when Kala arrives and encounters trouble with Gunda and her boys that Tarzan finally realizes what he is supposed to be: a Tarzan, with his own special tricks that no one else in the jungle can do. Terk and Tantor save Tarzan and become best friends once again. Tarzan tells Kala that she was right before, and that he is a part of his family. Kala then gives him a hug and tells him how proud she is of him for rescuing her from the two ape brothers, after which Mama Gunda punishes Kago and Uto for destroying Zugor’s tree house and Terk and Tantor are finally reunited with Tarzan.