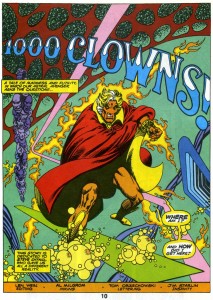 AV Club has just put up a great article looking back the the history of superhero comics in the U.S. It focuses primarily on Jim Starlin’s work on Warlock, but gives a pretty comprehensive idea about the origin of many contemporary archetypes and tropes. The introduction reads:

Superhero comic books descend from the pulps. That is, they are a product of a massive surge in genre fiction produced in the early decades of the 20th century. Look at your favorite superheroes today, and you can still see the traces of this lineage. It’s not as if fantasy, science-fiction, or detective stories hadn’t existed before 1900, but so many of the expectations and conventions that genre fans take for granted today were only created and codified after the turn of the century. Many of the people who got in on the ground floor of the Golden Age of comics had experience with pulp magazines like Amazing Stories and Weird Tales as writers, editors, or devoted fans.

It’s a great piece Tim O’Neil, so we highly recommend it to all fans of our comics and Edgar Rice Burroughs classics. Check it out here.