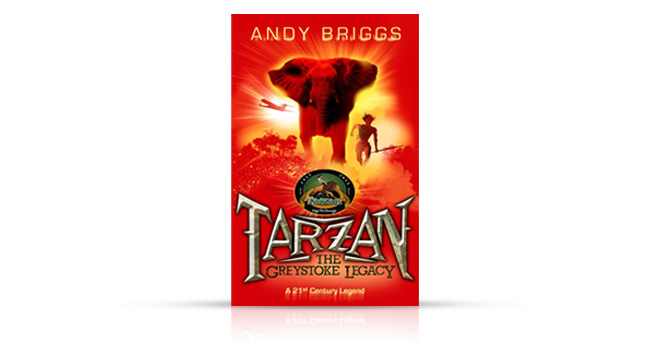 A New Eco-Hero for the PlayStation Generation as Tarzan Returns to his Roots In new books London, April 2010. History is littered with examples of brands trying to reinvent themselves to appeal to a new generation, but for one of literature’s most successful franchises, all that’s required is a return to its roots – literally.

Since he first swung onto the world stage in 1912 the bare-chested, savage yet principled character of Tarzan has struck a chord with generation after generation as he fights to protect the jungle, its resources and its inhabitants. Now, almost a hundred years later, a partnership between the Edgar Rice Burroughs estate and one of Britain’s hottest writers is set to bring Tarzan the Eco Warrior to the PlayStation generation, with a new series of Tarzan novels.

“We’ve seen plenty of examples of literary brands being reinvented by new writers anxious to engage new young audiences, but it can be dangerous territory” said branding expert KD Adamson. “However, in the case of Tarzan there’s no search for a new angle: he’s been saving the planet for nearly a hundred years. On this occasion it’s a question of the audience catching up with Tarzan rather than the other way around.”

The power of a global brand isn’t an absolute guarantee of success and before committing to the new series, the first of which ‘Tarzan, The Greystoke Legacy’ is set to appear in 2011, the Edgar Rice Burroughs Estate looked carefully for an author who could match the vivid storytelling which originally brought Tarzan to life and inspired millions including environmentalist Jane Goodall.

Andy Briggs, whose credits include the highly successful ‘Hero.com and Villain.net’ book series, now in negotiation for an animated TV series, and a string of scriptwriting credits for the likes of Disney and Paramount Pictures has already been involved with iconic franchises such as Highlander and Judge Dredd. For him, the character of Tarzan and his beliefs are ripe for re-booting. Tarzan remains the iconic hero, the man raised by apes and protector of the wild but in the 21st century he is edgier and more feral.

“Tarzan has more perils to face now: warring rebels, poaching of endangered animals, illegal logging and the decline of the environment are all issues that resonate with younger audiences” explains Andy. “He combines untamed savagery and power with a deep morality and love for the environment which genuinely speaks to them, as does the perennial love story of Tarzan and Jane, although Jane now carries an iPod.”

The combination of strong writing, a global icon and the up-coming Tarzan centenary provide the perfect springboard for what looks likely to be a major series of books with an inevitable cross-over to film and merchandising. It is a combination which Julian Friedmann, agent to both Andy Briggs and Edgar Rice Burroughs, Inc. believes has all the right ingredients.

“Avatar was a huge movie but the story behind it was really about respecting and protecting indigenous species and communities at the expense of profit, and those are Tarzan’s brand values in a nutshell” said Julian Friedmann. “We will have the first chapters ready shortly and will be presenting them to publishers at the London Book Fair in a couple of week’s time.”