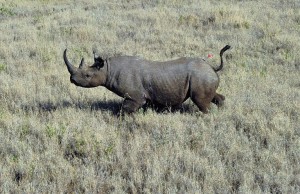 Washington (AFP) – A Texas hunting club said Friday it aims to raise up to a million dollars for endangered black rhinoceroses by auctioning off a permit to kill one in Namibia.

“First and foremost, this is about saving the black rhino,” said Ben Carter, executive director of the Dallas Safari Club, which is hosting the auction early next year.

Black rhinos are internationally considered an endangered species and the World Wildlife Fund says about 4,800 are alive in the African wild.

Carter said in a statement sent to AFP that the Namibian government “selected” his hunting club to auction a black rhino hunting permit for one of its national parks.

The permit is expected “to sell for at least $250,000, possibly up to $1 million. The Conservation Trust Fund for Namibia’s Black Rhino will receive 100 percent of the sale price,” said the statement.

Namibia has an annual quota to kill up to five black rhinos out of the southern African nation’s herd population of 1,795 animals.

A single permit issued to a US hunter in 2009 to kill a black rhino fetched $175,000 for the Namibian Game Products Trust Fund which pays for conservation efforts, according to the US Fish and Wildlife Service.

Tim Van Norman, chief of the branch of permits at the FWS said the US government has not yet issued any permit to the Dallas Safari Club to return a rhino’s carcass to the United States.

The individual hunter who is identified as the winner of the auction would first have to pass certain background checks and the animal chosen for the hunt would have to be approved as being beneficial to the conservation of the species for the US government to allow the trophy to come back inside US borders, he said.

Van Norman said Namibia has determined that older black rhino males that have already produced offspring and are in reproductive decline are the best targets for hunting.

“Black rhinos are very territorial so you will have an older male that is keeping younger males from reproducing,” he explained.

“By removing these older males from the population, you get an increase in the production of calves. Younger males are able to impregnate the females that are in that area so you get more offspring than from some of these older males.”

The DSC said the auction would take place at its annual convention January 9-12, 2014 in Dallas.

The winning hunter will have to hire a guide to lead the hunt and will be accompanied by Namibian wildlife officials.

Limited hunting is a conservation strategy that is supported by US wildlife officials, the International Union for the Conservation of Nature and the Convention on International Trade in Endangered Species — all of which list rhinos as endangered, according to the Dallas hunters’ group.

The Humane Society of the United States described the news of the auction as “disturbing” and vowed to campaign against the issuance of a US permit to return the trophy.

“The world is seeing a concerted effort to preserve the very few black rhinos and other rhinos who are dodging poachers’ bullets and habitat destruction,” said Wayne Pacelle, president of the HSUS.

“The last thing they need are wealthy elites from foreign lands coming in to kill them for their heads.”

He also questioned the ethics of wealthy, competitive trophy hunters who say they want to kill an animal in the name of conservation.

“Shooting a black rhino in the wild is about as difficult as shooting a parked car,” he said.

“If these are multimillionaires and they want to help rhinos, they can give their money to help rhinos. They don’t need to accompany their cash transfer with a high caliber bullet,” he said.